Celebrity Jersey Cards is a regular series in which I create virtual trading cards for celebs wearing sports jerseys.  Today, we feature the two NFL expansion teams from 1995 repped by two more lovely ladies from tv's Deal Or No Deal.

Born in Canada, Leyla Milani rose to fame as the model holding case #13 on Deal Or No Deal.  She also appeared in the 2005 WWE Diva search, the 2006 Lingerie Bowl and several other tv and movie roles.  Milani is joined by DOND Castmate Kelly Brannigan on her Celebrity Jersey Card. 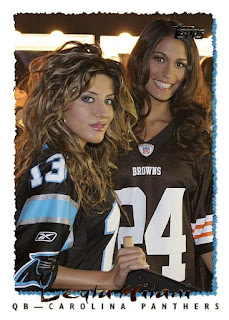 Megan Abrigo was born in Hawaii and started modelling at a young age.  She put her modelling career on hold to attend college, but restarted it in time to land a spot as the model with case #6 on DOND.  For her Celebrity Jersey Card, Abrigo appears with host Howie Mandel.  Leyla Milani is also partially visible. 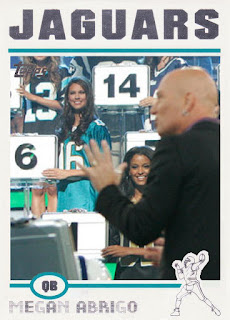