Celebrity Jersey Cards is a regular series in which I create virtual trading cards for celebs wearing sports jerseys.  Today, I am in a "New York State of Mind."

Ashley Dupre rose to fame (or infamy) through a scandal involving Eliot Spitzer, then Governor of New York.  She since has worked hard to leave that all behind and forge a new career.  She has done some singing and acting.  Although she is wearing a #6 Mark Sanchez jersey, I see her more as a wide receiver, because of her ability to dodge and maneuver through life.  She gets extra points for having a football on her Celebrity Jersey Card. 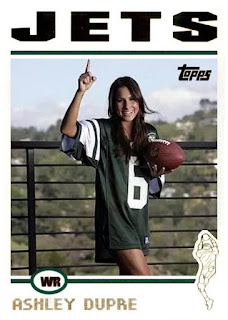 Velvet Sky has appeared on many previous Celebrity Jersey Cards because of her popular NFVel posters.  It's no secret that Velvet is one of my favorite woman wrestlers.  She was even kind enough to do a promo for my site (see left column).  The Giants might have had a better year if Velvet was running routes for Eli.  At least they would have been more entertaining. 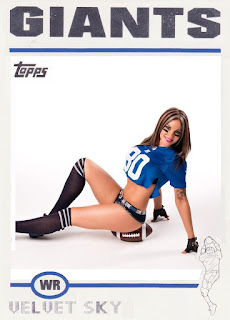