New Jersey native rocker Jon Bon Jovi is a legit football fan.  He previously was the primary owner of the Philadelphia Soul of the Arena Football League and has been trying to buy into an NFL franchise.  For his Celebrity Jersey Card, he is wearing a Ben Roethlisberger Pittsburgh Steelers jersey. 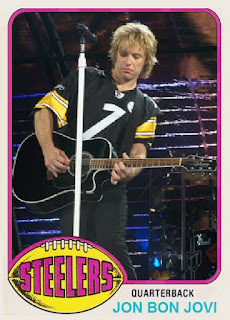 Actress Hilary Swank was born in Lincoln, Nebraska.  Onher Celebrity Jersey Card, she is seen wearing a New Orleans Saints jersey, while on the sidelines of a game.  The somewhat blurry figure on the lft is singer Harry Connick Jr.  You can't see the number in this picture, but she is wearing #9 of Drew Brees.  She gets extra points for the Saints cap. 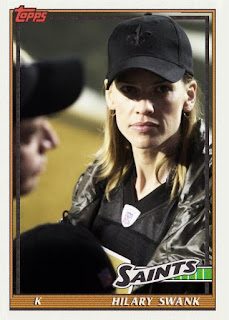