Megan Cavanagh of A League of Their Own

Today I feature another actress from A League of Their Own, one of my favorite movies.  Chicago born Megan Cavanagh played Marla Hooch, which was her film debut.
Marla was the second baseman for the Rockford Peaches.  The character was so endearing.
I talked to Megan about her character at a Hollywood Celebrities Show.  She talked about how many people have issues about not being the pretty one or the popular one.  Marla was so sweet and likable that people saw beyond her lack of glamour.  Megan said she is planning a documentary about that topic.  That would be one I'd love to see.
She is touched and proud that people still come up to her and talk about how much ALoTO meant to them.  Although many of those people are women, Megan said the number of men who loved the movie still surprises her.  She is grateful for all of the fans.
On a side note, I had completely forgotten that Megan had a recurring role on tv's Home Improvement as Trudy, who eventually married Al Borland in the finale. 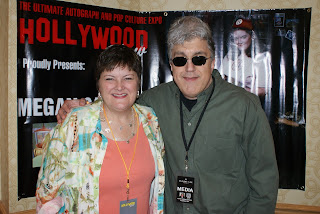