Once again, I am bending the rules of Friendly Encounters to cover family ties.  I'll do anything to give more exposure to the Chicago Bandits.
A native of New York, Kristen Brown was a star softball player at North Carolina.  Upon graduation, she was drafted by the Bandits in 2016.  In her rookie season, she hit .225 with 5 home runs, 11 rbi's and 7 runs scored.  She had the distinction of making the catch for the final out as the Bandits won the NPF title last season.
Earlier this season, her father Bobby introduced himself to me and thanked me for my coverage of the team.  That was so very nice of him to do.  I had the pleasure of talking to him several times since then and I always enjoy chatting, even though he is a fan of the hated New York Mets.  I can't blame him for staying loyal to his hometown team though.  As long as he continues to cheer for the Bandits, all is good from my pint of view.
It's always nice meeting the family of players.  It makes everything a bit more of a personal and special experience.
I thank Kristen for her contributions to the Bandits and for having time for our interviews.  I also thank Bobby for his kindness and humor. 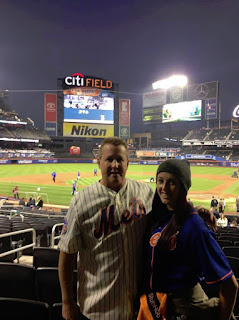