People who go to comic cons (or similar) meet lots of celebrities. Generally speaking, you will meet celebrities who mean something to you. On occasion, you will meet celebrities who really mean a lot to you. Such was the case earlier this year when Hardcore Heather Owens met wrestling legend Madusa at Days of the Dead.
Heather has been a fixture on the indy wrestling scene for several years. She's a hard worker, who can work either side, but is probably better as a villain. Outside of the ring though, Heather is an absolute sweetheart.
Heather is one of the unsung heroes at Days of the Dead. She is always busy making sure things run smoothly. While she is always a blur of activity, she always has time for a picture with her fans (like me) who recognize her there.
Heather has been a big fan of WWE Hall of Fame wrestler Madusa. I'll let her express herself here though.
What a sweetheart! 💕 Madusa is such an inspiration and just a super down to earth Classy Broad ❤ Sooo...if you are at DAYS OF THE DEAD right now...you NEED to meet her. DO IT! 🤗
The funny thing is that I could use those exact words to describe Heather. I have seen her at wrestling shows. I see the response she gets.
Basically, I would say these are two #ClassyBroads and 2 real sweethearts.
Days of the Dead returns to Chicago November 16-18. Check DaysoftheDead.com for more info. Heather will be ther, as will plenty of other celebrities. Of course, I'll be "On the Beat" as usual. 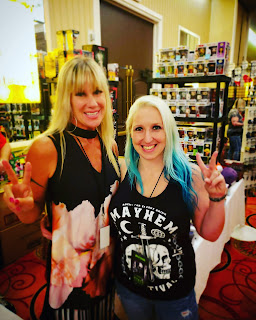 Madusa and Heather Owens in Indianapolis, IN-June 2018.
Posted by Johngy at 6:00 AM