I have known Mike Pankow for several years. Mike is a legit journalist, having worked for several media outlets through the years. Currently, he is a sports copy editor at the Chicago Tribune and a writer/copy editor at UIC Alumni magazine.
As if that is not enough to keep him busy, Mike started Windy City Slam, a website covering wrestling locally and worldwide. Last year, I had the pleasure of helping Mike with a few wrestler interviews at Wizard World. Mike is a great guy and I was happy to contribute to Windy City Slam.
Anyone can have a website, but running a successful website is a big challenge. There are a lot of wrestling sites out there, but not many are different or interesting enough to make me want to return. Mike's early work with Windy City Slam shows great hope for the site's future.
Mike obviously has a passion for wrestling. He is hardworking, dedicated and focused on making Windy City Slam a success. I think he'll do well and I hope to join him for future ventures.
At a recent UIC basketball game, Mike met broadcasting legend Wayne Larravee. Actually, I see this as two media legends.
Larravee is beloved by Chicago fans for all of his work, especially his time with the Chicago Bears. Despite moving to Wisconsin, Larravee will always hold a special place in Chicagoans' hearts. We hated seeing him leave here, but he went where his heart is and we can respect that.
I highly encourage anyone, especially wrestling fans, to check out WindyCitySlam.com. Despite it still being in the early stages, Windy City Slam has a lot of content and it is growing bigger and better. 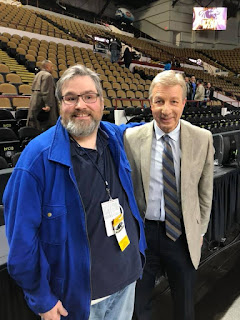