Cards That Never Were is a recurring series in which I create virtual trading cards for players missed in various sets. It is a concept I borrowed from far too many other to list, but I appreciate all of their efforts.
The NHL has a unique system, where every team has an EBUG (Emergency Backup Goalie). This person is not on the active roster, nor is he paid. He only dresses in a rare situation when a goalie or multiple goalies are injured and a replacement cannot be recalled from teh minors or signed in time for a game. The EBUG rarely gets into a game, but it is an exciting situation, especially for the EBUG.
Eric Semborski served as an EBUG for the Philadelphia Flyers and the Chicago Blackhawks duering the 2016-17 season. Semborski was a programs coordinator and youth hockey coach at the Philadelphia Flyers’ practice facility.
Semborski almost got into the game when he was an EBUG with the Flyers. He was inserted into the game with about a minute left, but the referee disallowed it since the goalie wasn't injured. Semborski happily stayed on the bench for his stint as an EBUG with the Hawks.
Just because he never got into a game doesn't mean he should have been ignored by the card manufacturers. I rectified the omission by creating an Upper Deck card for Semborski. 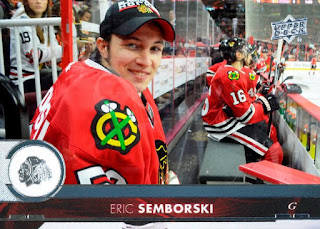