This is a regular series in which I create virtual trading cards for celebrities wearing jerseys. Today we feature two legendary athletes out of their sport.

Born in Switzerland, Boris Becker grew up to be a tennis legend. He has won titles and tournaments all over the world. Becker won 15 titles and achieved a high ranking of #6 during his career. Now retired, he lives within walking distance from Wimbledon. For his Celebrity Jersey Card, Becker is wearing a #86 Maple Leafs jersey. No Leaf has worn that number and I am unaware of the significance. Becker's first Wimbledon title was in 1985, but who am I to question a legend? 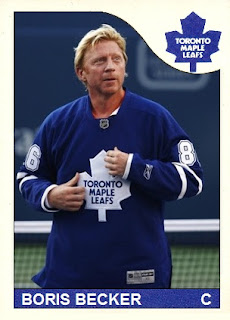 Lew Alcindor was born in New York City and changed his name to Kareem Abdul-Jabbar early in his NBA career. The Hall of Famer was a 6x MVP and won 6 NBA championships (one with the Bucks and 5 with the Lakers). For his Celebrity Jersey Card, Abdul-Jabbar wore his familiar #33, which waqs most notably worn with the Kings by Marty McSorley. 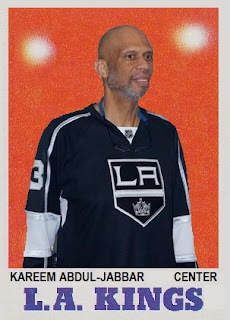