This is a regular series in which I create virtual trading cards for celebrities wearing sports jerseys.

Born in Yugoslavia, Rita Ora is a British singer, songwriter and actress. She gained success for being featured on a single by DJ Fresh. In 2014, Adidas announced a collaboration with Ora collaborated for Adidas Originals. Ora sports a Brooklyn Nets jersey for her Celebrity Jersey Card. Despite dating back to the 1967-68 season in the ABA, the Nets did not have a #8 until Eddie Gill until the 2001-02 season. 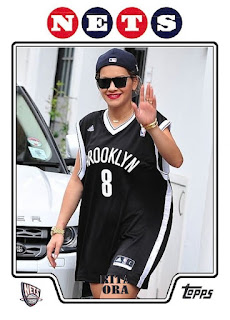 Born and raised in Bradford, West Yorkshire, Zayn Malik is also a Bitish singer and songwriter. He appeared on The X Factor in 2010 as a solo act, but was eliminated. He was brought back with four others to form the band which eventually became One Direction. Malik left One Direction in 2015 to resume his solo career. For his Celebrity Jersey Card, Malik is seen with the jersey of the Miami Heat. 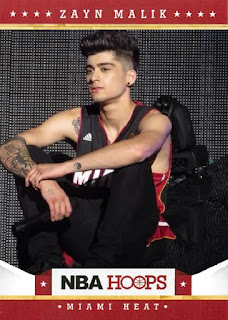