I spent much of last weekend at the Big East Women's Basketball tournament. You can find stats and recaps on BigEast.com. I'm here to write about the experience. I also wrote about the experience online for Global Traveler at Big East Women's Basketball Tournament and on the Patch at DePaul Wins Big East Women's Basketball Tournament.
I admit, I was never a big fan of women's collegiate sports. Actually, I was never a huge fan of any college sports.
The real start of my journey into women's collegiate basketball started with the Chicago Bandits. I started covering the Bandits and really enjoyed it. That led me to the Northwestern softball team and later the DePaul softball team. I also really enjoyed those softball games, although sometimes it was a bit chilly, being that the games are played in April and May.
Last season, I saw the Big East Women's Basketball tournament was being held in Chicago. I applied for a press credential and somewhat surprisingly I was approved. My first women's collegiate basketball game was the Big East tournament. You can't start much better than that.
This season, starting with Marquette's Media Day, I closely followed Marquette and DePaul. Whether in person or on tv, I watched more games than I can count.
The Big East tourney was once agin in Chicago and I was once again in press row. Every seat at Wintrust offers great views, but my courtside seat was especially good.
After a weekend full of great basketball, it all came down to DePaul versus Marquette for the championship. I was one of many who predicted they would meet in the final.
I gave the slight edge to the #1 seeded Marquette, but the win would mean more to #2 seed DePaul in terms of their seeding in the upcoming NCAA tourney.
A large and very vocal crowd filled Wintrust. The proximity to Milwaukee brought many Wisconsinites to Chicago, creating a somewhat divided crowd.
Both teams started strong, but Marquette looked just a bit better. I found myself flip-flopping all game. I loved both teams. Knowing the lady athletes a bit, I didn't want to see any of them leave without the win.
Marquette started to pull away in the 3rd quarter, but DePaul kept it close. Every time it seemed like Marquette was in command, DePaul came roaring back. I realized I was watching something special.
With 5 seconds left, DePaul hit a hot and made a free throw to give them a one point lead. Marquette had one final chance, but the shot missed.
DePaul won and the crowd rushed onto the floor. I joined the celebration, congratulating the winners. I also congratulated Marquette coach Caroln Kieger and her players, because they had a great season and a fantastic tournament. They just fell a bit short.
The emotions of the players ran deep. I saw the joy from the Blue Demons. I saw the despair from the Gold Eagles. I saw exhaustion from both teams. I'm sure in time, both teams will also show great pride in this game.
I thank Marquette's Megan O'Shea and DePaul's Bob Sakamoto for facilitating my coverage all season. I thank both universities for their hospitality.
Women's collegiate basketball isn't done yet though. Next up is the NCAA tournament. If it is anywhere near as good as the Big East tourney, we are in for some awesome action. I will once again be seated courtside and I will be reporting back here and for GT and Patch.com. 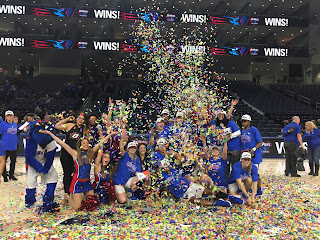 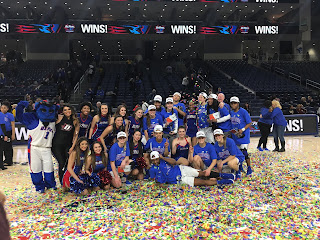 Congrats to the Blue Demons!! Sounds like a great tournament!