This is a regular series in which I create virtual trading cards for celebrities wearing jerseys. Being in WWE WrestleMania season, I present two wrestlers repping a legendary NBA rivalry.


Stephanie Nicole Garcia-Colace was born 16 minutes before her twin sister Brianna, but they rose to stardom together in the WWE as the Bella Twins. Nikki Bella has other familial wrestling ties, including stepfather John Laurinaitis and husband Daniel Bryan. Nikki is a 2x WWE Divas champ. For her Celebrity Jersey Card, she is shown wearing #44, which was worn by several Celtics stars, including Paul Westphal, Danny Ainge and Rick Fox. 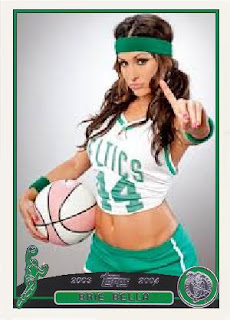 Brianna Monique Garcia-Colace followed her twin sister into the world, but grew to fame with her in the WWE. She won the WWE Divas title once, but has been a fixture on the main event scene for most of her career. She seemingly is split from her former fiance John Cena, although rumors persist it is a storyline. For her Celebrity Jersey Card, Brie is sporting the Lakers #24, worn very famously by Kobe Bryant. 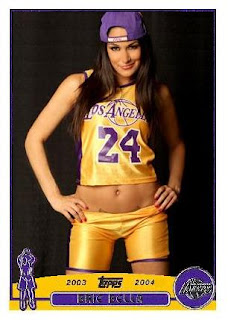