The Chicago Bandits lost another veteran when Natalie Hernandez recently announced her retirement. Then there were none. Natalie was the last of the Bandits remaining from my first year covering the team.
Natalie joined the Bandits after a great career at UIC. A versatile player, Natalie worked very hard to earn her place on the team. She became an excellent NPF player and a fan favorite.
Undrafted and earning her spot on the Bandits via an open tryout, Natalie is one of the biggest success stories ever in the NPF. She showed players from smaller schools could make it. She showed you can make it without being drafted. Natalie gave hope to many young players who might not be playing for major softball programs.
I interviewed Natalie every season, but my favorite interview with her came from Kenzie Parker, Nat's biggest fan. The Parker family lives in Michigan, but they closely follow the Bandits and Natalie and make it out here for a few games every season. Kenzie has submitted questions for my interviews, but this was her first time as the interviewer. Kenzie did a great job and Natalie was very gracious in making time for this.
That interview can be found at On the Beat With Natalie Hernandez. You can also see the rest of my interviews with Natalie and the Bandits on the Bandits playlist on the Johngy's Beat YouTube channel.
Natalie will continue in her role as an assistant softball coach at Transylvania University in Ohio. She has a bright future in coaching, but she will do well no matter what career path she follows.
I really appreciate Natalie's time, consideration and friendship over the years. She will be missed on and of the field. 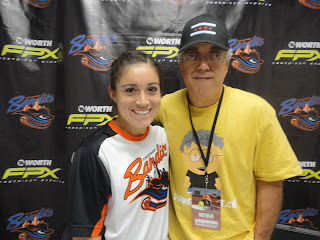 Natalie Hernandez and me in Rosemont, IL-Summer 2014.
Posted by Johngy at 6:00 AM