Chris Bejcek is one of the many great people I have met through my association with the Chicago bandits. Chris is a longtime fan and can usually be found behind home plate at the games.
On the rare day that he misses a Bandits game, he is probably at a concert. I believe Chris has been to more than 1,000 concerts. That's an impressive number, but I wonder if it is more than the number of Bandits games he has attended. I bet the totals are close.
Marshall Crenshaw began playing guitar at the young age of ten. He played in bands throughout high school. In the late 1970's, he played John Lennon in the musical Beatlemania. Crenshaw has been delighting audiences ever since, including a performance in Chicago last year, where Chris met him.
I enjoy following Chris on social media, seeing all of the musical performances he attends. Even better though, is seeing Chris in person at the Bandits games. The Bandits begin play in a couple months and I am sure Chris will be there as always. In the middle of a long offseason and winter I look forward to seeing Chris and the other members of Bandit Nation.
You can get all of the info on the Bandits at ChicagoBandits.com. You can also follow the Bandits on Facebook. 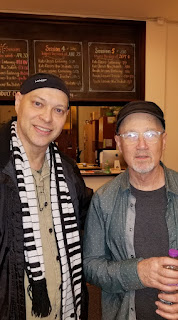 Marshall Crenshaw is a big favorite of mine. I've seen him live several times over the years, including a solo show just a few months ago. Thinking I may go see him with the Smithereens too. Great songwriter and performer.