This is a regular series in which I create virtual trading cards for celebrities wearing jerseys. We check in with a couple musicians honoring their hardwood favorites.

Born in Connecticut, John Mayer rose to fame in the early 2000's. Despite his mass popularity, Mayer has been known to make surprise free appearances at small venues, much to the delight of the patrons. For his Celebrity jersey Card, Mayer wore #1 for the OKC Thunder. Nobody actually wore that number for OKC, since it was retired for Gus Williams, who played for the Seattle SuperSonics, predecessors of the Thunder. 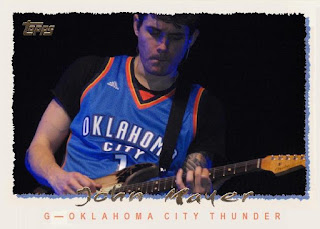 A native Texan, Selena Gomez first appeared on television on Barney & Friends and later on Wizards of Waverly Place. Despite her young age, Gomez has built an impressive acting and singing resume. She showed her Texas roots by wearing a San Antonio Spurs jersey at a concert to earn her Celebrity Jersey Card. The #1 was worn most notably by Rod Strickland and currently by Kyle Anderson. 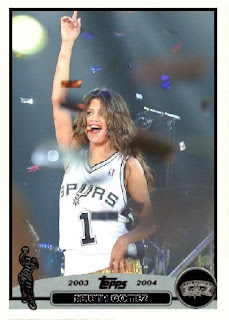