This is a regular series in which I create virtual trading cards for celebrities wearing jerseys. On WrestleMania Day, we feature 2 champion female wrestlers.

Ashley Fliehr was born in Charlotte, NC. The daughter of the legendary Ric Flair, Ashley adopted her hometown name as her own when she joined the WWE. She has won 8 women's singles titles in the WWE, but has a way to go to match her father's 16 counted (22+ real) titles. Still, Charlotte has proven to be an excellent wrestler on her own. Surprisingly, her Celebrity Jersey Card features her wearing a Los Angeles Kings sweater and not a Hurricanes one. The #16 is probably for her father's recognized titles, but it could also be for HOFer Marcel Dionne. 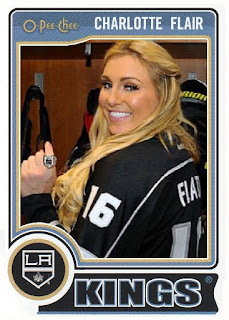 Born in New Jersey, April Jeanette Mendez rose to fame as AJ Lee, a 3 time women's champ in the WWE. Much like her husband CM Punk, she left the WWE and has stayed out of the limelight for the most part. Also, much like her husband, she was popular and successful in the WWE despite a relatively short run and fans still hope to see both return. Her Celebrity Jersey Card also features her husband, a noted fan of the Blackhawks. 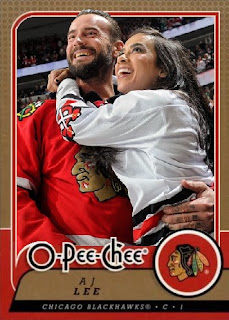