Although he was billed as hailing from Glasgow, Scotland, Roddy Piper was actually born in Canada. He overcame a rough upbringing to forge a Hall of Fame career in wrestling. Unfortunately, Roddy died in 2017, far too early. He was my favorite wrestler and he was a friend. He joined fellow wrestling legends Bobby "The Brain" Heenan and "Mean" Gene Okerlund for a special day in Toronto. This is the first Celebrity Jersey Card featuring a kilt. RIP RRP. 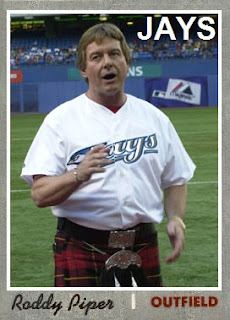 Born in South Dakota, Gene Okerlund started his legendary wrestling announcing career in Minnesota with the now defunct AWA. Along the way to his Hall of Fame career, "Mean" Gene interviewed all of the big names while working for all of the big companies. Gene's son Todd played for the US Olympic hockey team and briefly for the New York Islanders. Gene died earlier this year, only a couple months after I last saw him. Gene's Celebrity Jersey Card comes from a special day with the Blue Jays, which also featured "Bobby The Brain" Heenan and "Rowdy" Roddy Piper. 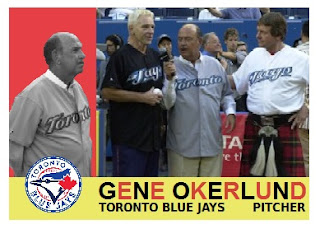