When the picture below was taken, the wrestler was known as Crazy Mary Dobson. She was the women's champ at Resistance Pro Wrestling. Although she was pretty young, you knew she was destined for great things in wrestling.
Those great things would start coming quickly, s she soon joined the WWE, where she is currently wrestling as Sarah Logan. Whether Mary or Sarah, she is a real talented performer. I expect her to continue to improve and one day become WWE women''s champ.
The man in the photo was known as Jim Strong. Actually, he is still Jim Strong. He really has no fascinating back story, but I had to include him because he's in the picture with Sarah.
Seriously, Jim is a good friend and a big fan of wrestling. I just like giving him a hard time. Along with being a fan, he is a big supporter of the performers, meaning he buys their tshirts (fortunately he doesn't wear them like Sarah), pictures and more. Jim has met so many wrestlers, but Sarah has to be among the best. If she is not yet, it really is only a matter of time.
While Sarah is on her way to greatness, Jim is cruising along in mediocrity.Occasionally he rises above, lke now, when he is the co-feature on JohngysBeat.com. 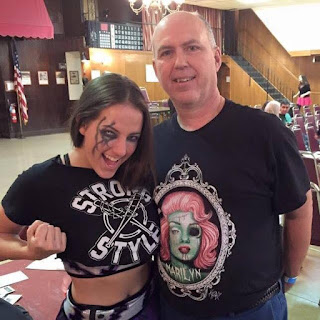