Friend Encounters is a weekly series about friends who have met celebrities.

I have been meeting celebrities for so long, several of them have become friends. One of the most recent celebrities I have befriended is former Chicago White Sox player Eric Soderholm.
Eric started his career with the Minnesota Twins. After a bad knee injury, he joined the Sox before the 1977 season, a season in which he was named the AL Comeback Player of the Year. The '77 Southside Hitmen were a very special team and probably my favorite team of all time.
After baseball, Eric and his brother Dale, a former minor Leaguer, opened a very successful ticket broker business. Eric also did some scouting in baseball.
Eventually, Eric moved away from other business ventures and turned his focus to a new calling. Eric and his family opened SoderWorld Healing and Wellness Center in Willowbrook, IL. That is where I met one of my childhood baseball heroes.
PL Myers and I visited SoderWorld to interview Eric. Located in a woodsy area, SoderWorld exudes peace. They offer many classes, discussions and all sorts of activities aimed at helping patrons have a better life. It is definitely a business, but when talking to Eric, we soon realized it is also a labor of love.
Meeting and interviewing Eric was one of the highlights of my work on HeroTV. Sitting next to him, I kept thinking back forty years to when I was cheering for him. It was one of those surreal moments. It is also great to see Eric doing well.
Eric is still active on the White Sox scene. He has attended the conventions and done a few appearances. At the recent convention, Eric took a selfie with current Sox star Jose Abreu. I always enjoy seeing the past and present stars converge.
Our interview with Eric can be found at HeroTV Eric Soderholm Part 1 and HeroTV Eric Soderholm Part 2. Also, go to SoderWorldWellness.com for more info on this awesome place. 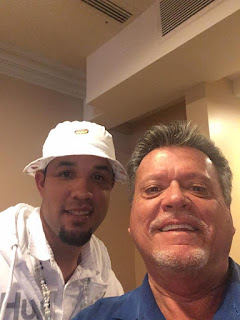 Jose Abreu and Eric Soderholm in Chicago, IL-January 2017.
Posted by Johngy at 6:00 AM