This is a regular series in which I create virtual trading cards for celebrities wearing jerseys. We continue to make our way alphabetically through Major League Baseball.

Anson William Heimlich was born in Los Angeles and grew to fame in show business as Anson Williams. He originated the role of Warren "Potsie" Weber on a segment on Love, American Style and is one of only three actors (with Ron Howard and Marion Ross) to reprise their roles when Happy Days became a series. Williams has remained very active acting and directing. As a trivia note, Williams' uncle, Dr. Henry Heimlich is the namesake of the famous maneuver for saving choking victims. Willliams' Celebrity Jersey Card come from a special Happy Days Night the Brewers held.. 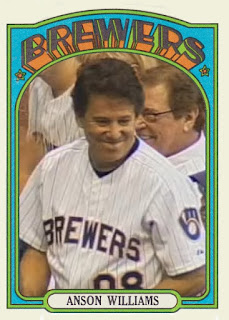 Like his castmate Williams, Don Most was born in Los Angeles and rose to fame on tv's Happy Days. Ralph Malph was the jokester. Most has remained active in acting, along with doing voiceover work and singing. Most's Celebrity Jersey Card comes from the special Happy Days Night the Brewers held. 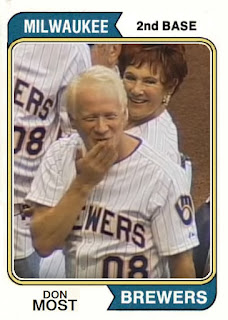