Motor City Comic Con, May 17-19, is about 2 weeks away. While I count down the days, I look back on some of my favorite moments over the years at MCCC.
Like millions of other boys, I was a big fan of The Hardy Boys book series when I was a youngster. I was a young teenager when The Hardy Boys/Nancy Drew Mysteries aired on television. It was an interesting show in concept, because the stories attracted the boys, while heart throb actors Shaun Cassidy and Parker Stevenson attracted the girls. Basically, it appealed to all youngsters.
I had the pleasure of interviewing Parker at MCCC 2013. That interview can be found at On the Beat with Parker Stevenson. I like to think I improved a lot since that interview. Now, I would have asked more about the show's target demographic, because I think it is very interesting hwo they did that. I'd also ask more about his photography. Obviously, he is very talented and I am sure he would have talked more about this, because most interviewers wouldn't have brought it up.
Under the constraints of the convention, I did okay and it was very short. At least I was able to log in an interview with Parker. I am very happy with that.
Parker has remained busy in show business and with his photography. He has been very cool at every convention where I have seen him.
Check out his photography work at ParkerStevensonShadowWorks.com. Photography is a hobby and passion he developed at an early age. He really has done some beautiful work.
Go to MotorCityComicCon.com for all of the info, including the celebrity guest list and scheduling. You can also find Motor City Comic Con on Facebook and other social media platforms. 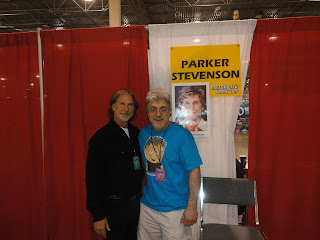