The Motor City Comic Con returns May 17-19. While looking forward to this year's event, I look back on some my most memorable moments over the years at MCCC. Unfortunately, some memories are bittersweet.
Before he was Big Van Vader, Leon White was a star offensive lineman for the University of Colorado and was drafted by the Los Angeles Rams in the 1978 NFL Draft. Unfortunately, injuries derailed his NFL career.
Football's loss was wrestling's gain. As Vader, he went on to become one of the best and most athletic big men in the business. His Vadersault was one of his most impressive moves.
I have met Vader several times, including at Resistance Pro Wrestling and at Motor City Comic Con. While always pleasant, he was pretty quiet. Still, if you started talking to him, he would warm up into the conversation.
In shaking hands with him even then, you could feel his strength. I can only imagine how strong he was back in his football days.
Vader had a rough stretch around the time I met him at MCCC. He had some health issues and there were a few scary moments. Unfortunately, Vader lost his battle in June 2018. He is greatly missed and fondly remembered by all.
Go to MotorCityComicCon.com for all of the info, including the celebrity guest list and scheduling. You can also find Motor City Comic Con on Facebook and other social media platforms. 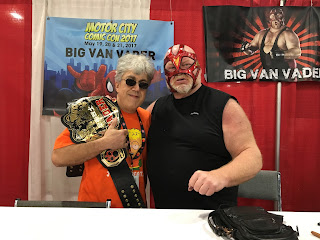