Ed Leslie first gained real fame as Brutus Beefcake in the WWF. It was the WrestleMania III match between Roddy Piper and Adrian Adonis when he gained "The Barber" nickname,. by shaving the head of Adonis. Beefcake had a lengthy and successful career, culminating in his WWE Hall of Fame induction earlier this year. The Miami Marlins held a wrestling-themed night featuring Beefcake and several others. Beefcake brought his trademark barber shears. Beefcake's Celebrity Jersey Card featured the shears, as well The Warlord, another wrestling legend. This card bends the time continuum, as it is well before the Marlins debuted. 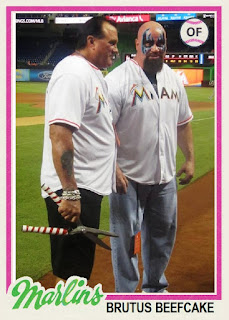 Florida native Terry Szopinski rose to prominence in wrestling as The Warlord. He wrestled as a singles competitor and also as part of The Powers of Pain tag team with The Barbarian. The Warlord will gain his WWE HOF induction sometime in the future. For now, he is celebrated on his Celebrity Jersey Card, along with Beefcake and Billy the Marlin. This card also went through the time warp, as it also precedes the debut of the Marlins. 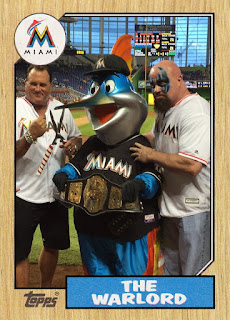