Bobby Hull is one of the first hockey players I ever remember. My parents (especially my mom) were fans of the Blackhawks, particularly Hull, Tony Esposito and Stan Mikita.
I have had the pleasure of meeting "The Golden Jet" several times and it is always a thrill. There are simply some legends who have an aura.
Hull spent a lot of years distanced from the Hawks, but fences were mended. Both sides and the fans are enjoying the reconciliation. No matter how and when the relationship soured, it was a long overdue reunion. Hull belongs as part of the Blackhawks family. Fans deserve to see him as part of Blackhawks functions.
Hull always has fun at appearances. At PopCon Milwaukee a few years ago, he was having a blast meeting other celebrities, including some local sports heroes. He reconnected with Fergie Jenkins, who pitched for the Cubs during the last few years of Hull's time in Chicago. He also had some fun with wrestler Baron Von Raschke, who was a fixture on the wrestling scene in this area at the time.
As a fan, it was cool seeing a Chicago hockey Hall of Famer with a Chicago baseball Hall of Famer and a midwest wrestling Hall of Famer. It was like worlds colliding.
It always makes me think of how things have changed. Back in my youth, even meeting one of these stars would have been awesome. Now, we can meet muliple players at once and have actual conversations with them. Everyone really wins in this instance. The fans meet their heroes. The stars meet their fans and make some cash. The stars get to reconnect with other stars. 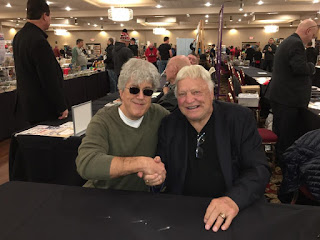 (5-Star) Picture worthy of a frame on Monk's Café from Seinfeld. Not many know of the history of Hull Sr. & the Blackhawks organization. Top Knotch again John!

I can remember watching the 3 Blackhawk greats Bobby Hull, Stan Mikita and Tony Esposito with our parents. I loved the Blackhawks then and still do many, many years later.