A native of Tacoma, WA, Miesha Tate is a former mixed martial artist who competed in the Ultimate Fighting Championship and is a former UFC Women's Bantamweight Champion. To the champ goes the cool swag. In this case, the swag was the UFC title belt, which Tate brought along when she raised the 12th Man Flag for the Seattle Seahawks. She posed in her #12 Seahawks jersey, holding her title belt for her Celebrity Jersey Card. 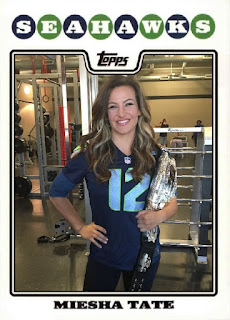 Born in Richmond, VA, Mickie James rose to fame in pro wrestling rings, where she won the Women's title 6x in the WWE and 3x in Impact Wrestling. James assumed the center position, but wore the #92 of former linebacker James Harrison for a WWE photo shoot. She also proudly displayed her swag, which is the Divas title belt. I give James extra points for striking a legit NFL pose on her Celebrity Jersey Card, even if there is a position discrepancy. An accomplished country singer, I am surprised James has not sung the National Anthem at a sporting event. 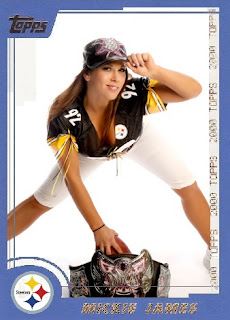