Swag Week is devoted to the cool stuff I have received while covering the world of pop culture. I conclude Swag Week with a signed softball from Monica Abbott, one of the all-time greatest players.
At the University of Tennessee, the left-handed pitcher went an unreal 189-34 on the mound. She has followed that by going 126-41 in National Pro Fastpitch action. She is also 13-1 for the United States National team. That doesn't even include her record in Japan and some of her career with the Scrapyard Dawgs, who left the NPF.
I had the pleasure of watching Monica up close during her time with the Chicago Bandits. Opponents fear her and fans of all teams cheer her, because she is always capable of throwing a perfect game or no-hitter . I've seen her throw both!
Monica and Team USA won a silver medal in the 2008 Olympics. It was a disappointing Olympics for them, although a silver medal is still quite an accomplishment. With softball returning to the Olympics in 2020, Monica and Team USA are hyper-focused on the gold medal.
The Olympics will take place in July 2020 in Tokyo. I have never looked forward to an Olympics as much as I am anticipating this one or at least the softball part of it. I will know much of the team and it'll be like watching friends play. I really can't wait.
Monica was very gracious with her time during her stay with the Bandits. Very popular also with the media, Monica always had time for me and I greatly appreciated that. With bigger media outlets following her, she could have easily skipped me and I would have understood, but she never did. Even on her birthday, after a series of interviews and a clubhouse celebration, Monica still gave me an interview.
She is pure class and determination. She is an elite athlete who constantly works on her craft.
She also gives back to the community via her time and the Monica Abbott Scholarship
It has been a pleasure covering Monica and know her as well. I appreciate all Monica has done professionally and personally tor me. She gave me a signed ball and it now sits proudly on my bookshelf.

Go to MonicaAbbott.com to learn more about Monica and to follow her road to the 2020 Olympics. I'll also be doing recurring coverage here and for Patch.com and GlobalTravelerUSA.com. 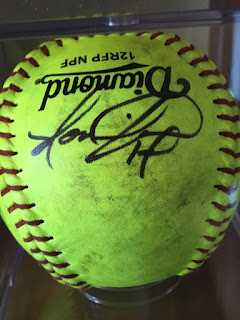