Haylie McCleney was a 4-time All-American, left-handed hitting softball outfielder for the Alabama Crimson Tide. By the time she left Alabama, she had accomplished the rare milestone of a .400 average, 300 hits, 200 runs, 100 stolen bases..
Haylie was selected by the USSSA Pride with the 13th selection in the 2016 National Pro Fastpitch Draft. In 2016, she hit .353 with 2 rbi's, 7 runs score and 5 stolen bases in 11 games.
Haylie has also made quite an impact on the international scene. She was a 2013 WBSC Junior Women's World Championship Silver Medalist. She also was a silver medalist and a gold medalist twice in the WBSC Women's World Championship in 2014, '15 and '18. A few months ago, the 2020 Team USA softball roster was announced and Haylie made the team. It is a fitting honor and well-deserved.
I look forward to July 2020, when Team USA softball takes the field in Tokyo. This is the most excited I have ever been about the Olympics. Having watched most of the players up close in the NPF and knowing several of them, I can't wait to see these elite ladies go for the gold.
Go to TeamUSA.org for more info on the USA Olympic team. For more info on Haylie, check out HaylieMcCleney.com or follow her at @HaylieMac8 on twitter and at @HaylieMac8 on Instagram. 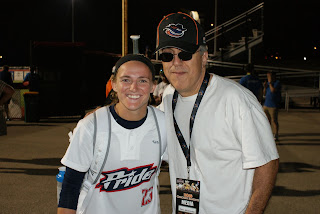