Catching Up With the DePaul Blue Demons

The DePaul Blue Demons defeated the Seton Hall Pirates on Sunday to improve their conference record to 12-1, good for 1st place in the Big East. They are 22-3 overall and ranked #13 nationally.
Last season, I was fortunate to cover the Big East Tournament at Wontrust Arena. The Blue Demons rallied to beat Marquette in the championship game to win the Big East title for the second straight year.
Senior guard Rebekah Dahlman was a key contributor to the success of the Demons last season. Dahlman's tenure at DePaul had a rough start as she suffered a season-ending injury in her first regular season game. Dahlman came back strong for the 2018-19 season.
In high school, Dahlman was a star player in Minnesota. She was a McDonald's All-American and the 2013 Minnesota Miss Basketball. She was a two-time Gatorade Player of the Year and the first player in Minnesota history to score over 5,000 career points. Highly recruited, she chose Vanderbilt.
A blood clot caused Dahlman to miss 22 games her first season at Vanderbilt. Injuries struck again in he Junior season, limiting her to 27 games. At first, it was thought to be a very serious condition, but eventually it was discovered that a rib was pinching a nerve causing the clot. Despite the injuries, Dahlman put up solid numbers in her time at Vanderbilt.
Last season, for DePaul, she started 15 of the 34 games she played. Dahlman averaged 6.5 points per game, with a high of 21. She had 77 assists with a game high of 7. She averaged 3.3 rebounds per game, but had a game high of 13. She also had 24 steals over the season.
On the personal side, Dahlman has strong basketball roots. Her grandfather John Kundla is in the Naismith Basketball Hall of Fame for his work as head coach of the NBA's Minneapolis Lakers and the University of Minnesota men's basketball team.
Like me, Dahlman was a marketing major, but that's really where the similarities end. Dahlman left DePaul a 2x champ. Since leavinbg DePaul, Dahlman has been an instructor at clinics and camps run by ND42, he brother Noah''s company. DePaul Coach Doug Bruno has stated he would lov eot have Dahlman on his staff.
Despite injuries hampering her promising college career, Dahlman kept coming back and producing. She was a great team player and a valuable part of DePaul's championships. Dahlman remains positive and grateful for her college career. She has a bright future. It was a pleasure covering her and knowing her a bit during my time covering the Demons last season.
The Blue Demons look to make another run at the Big East title. The Big East Tournament will be held at Wintrust March 6-9. I'll be covering the Demons and the tourney and I hope to see full houses of fans!
Go to DePaulBlueDemons.com for info on the women's basketball team and all sports. Also follow the ladies at DePaul Women's Hoops on Facebook for regular updates. 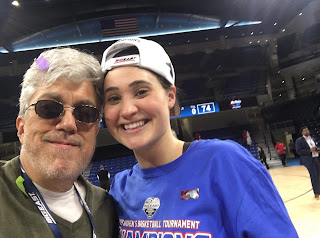