As I have previously written, I first met Tony Feddeler at either a comic con, a Chicago Bandits game or a wrestling show. That narrows it right down. In any case, I have known Tony for several years and we have enjoyed all three types of events many times.
At one such comic con, Tony met Heather Langenkamp, perhaps best known for her role as Nancy in the A Nightmare On Elm Street movie franchise. In addition to A Nightmare On Elm Street, Heather also was in Rumble Fish, The Outsiders and tv's Just the Ten of Us, among many other projects. Ordinarily, I would be envious of Tony meeting her, but I have met Heather several times. On second thought, I am envious, because I always love seeing Heather.
Heather has had her share of hardships unfortunately. Her teenage son died a couple years ago from brain cancer. She was also the stalking victim of a fan angry over the cancellation of Just the Ten of Us. That life event was the basis for Wes Craven's New Nightmare, in which she played a fictionalized version of herself. Despite all of that, Heather remains a very positive person.
Tony and I agree that Heather is just a real cutie. She is very fan-friendly and a very popular guest at any convention.
Tony is also very popular wherever he goes. Well, that's what he tells me at least. I have seen him surrounded by plenty of attendees several times. Oh sure, they might be family and friends, but they are numerous anyway.
Seriously Tony is a great guy and I always enjoy experiencing events with him. I look forward to many conventions, Bandits games and wrestling shows with Tony in 2020. 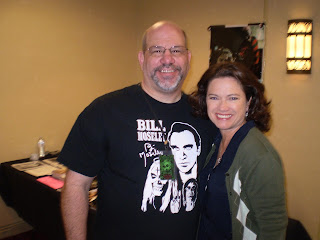