This is a weekly series in which I create virtual trading cards for celebrities wearing sports jerseys. In honor of the Super Bowl, we feature celebs repping both teams.

Philadelphia native Nathan Morris started singing at an early age. Morris had dreams of playing pro football, but ultimately followed a musical path. He was one of the founding members of Boyz II Men. Morris earned a Celebrity Jersey Card just recently when Boyz II Men sang the National Anthem before a San Francisco 49ers playoff game. Morris wore the #87, most famously worn by Dwight Clark. 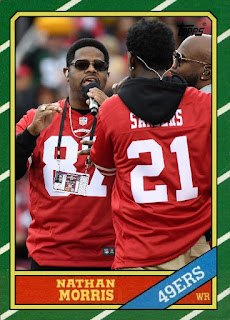 Holly Tucker was on The Voice Season Four. In 2018, Tucker was a part of Waco tourism program. Tucker sang about things to do while in Waco. Tcuker's Celebrity Jersey Card should have been the Dallas Cowboys or the Houston Texans, but because she sang the National Anthem for the Kansas City Chiefs, she is shown repping the Chiefs. At least the Chiefs were originally from Dalls, when they were the Texans. Tucker's #19 was most famously worn by Joe Montana. 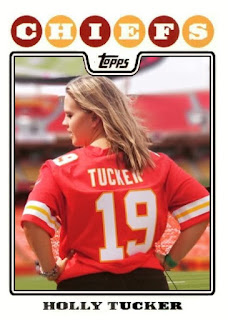