Friend Encounters is a weekly series featuring friends who have met celebrities. Today, we revisit the man who calls himself "Evil Zebra."

I have featured Evil Zebra many times. I am not sure how I originally connected with EZ, but I am sure it involved one of his celebrity encounters/ He has so many, I have told him he should write a book, a notion he eschews.
Although (so far) he refuses to write a book, EZ does post a lot of his celebrity pictures on his Facebook page. Today's "Blast from the Past" is of EZ with rocker Ted Nugent on the set of The Mike Douglas Show. EZ was a frequent visitor to the set and appeared on the show as well.
I plan to keep pushing EZ for more info and stories, with the eventual goal of the book. I realize that is a long shot, but EZ has so many untold stories and unseen pictures. It would be fascinating. 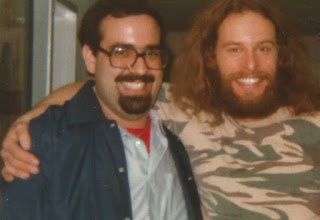