Celebrity Jersey Cards is a regular series in which I create virtual; trading cards for celebrities wearing jerseys. Today, we turn our attention to wrestlers on the hardwood.

Born in Limerick, Ireland, Rebecca Quin is better known as Becky Lynch, a current and 4 time WWE champ. "The Man" has had quite a run in the WWE, since she debuted in 2014, although she had been wrestling elsewhere since 2002. Lynch has done some acting and also worked for a couple years as a flight attendant. Currently engaged to WWE superstar Seth Rollins, Lynch has joined him in his fandom of Chicago teams. Prior to her involvement with Rollins, Lynch appeared at a Los Angeles Clippers game looking great in their jersey. I'd rather see Lynch in a Bulls jersey, but the Clippers jersey is enough to get Lynch on a Celebrity Jersey Card. 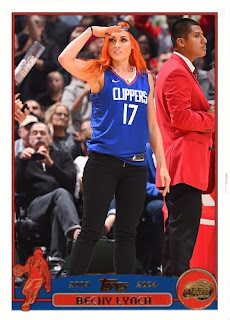 A native of Texas, Dustin Runnels is a second generation wrestler. His father Dusty Rhodes was a real legend. Dustin has enjoyed a long and successful career, including a long stint as Goldust, one of the oddest and greatest gimmicks in wrestling. Dustin is currently in All Elite Wrestling, where his younger brother Cody is a co-owner/promoter. Dustin's Celebrity Jersey Card comes from a backstage skit on WWE tv. I had to make two versions. 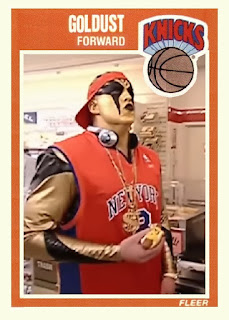 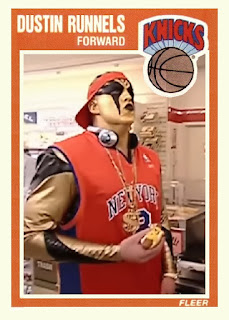