C2E2 (Chicago Comic and Entertainment Expo) takes over McCormick Place this Friday through Sunday. This is a special Friend Encounter that took place at a previous C2E2.
Scott Blair is a freelance illustrator based in Florida. He originally worked with paints, but switched to digital painting in 2005. He takes his original drawings, scans them into Photoshop and paints them digitally using a Wacom pad.
Several years back, Scott did illustrations of several women of wrestling. One of his wrestling models was our mutual friend Lisa Marie Varon. At C2E2 2012, Scott presented Lisa with his custom Wonder Woman sketch with Tara (Lisa). I actually interviewed Scott at C2E2 2012 and that can be found at On the Beat With Scott Blair.
Scott is extremely talented. He has created sketch covers, sketch cards and more. He even does commissions when he isn't too busy on other projects.
Lisa Marie had a great career in the ring, winning seven Woman's championships in the WWE and TNA. She is mostly retired now, but still makes appearances at comic cons. Lisa formerly owned The Squared Circle restaurant in Chicago. It was one of the most fun spots ever. I still miss it, but at least I get to see Lisa at conventions on occasion.
For more info on Scott and his creations, go to ScottBlairArt.com. Also, follow Lisa at @RealLisaMarie on twitter.

You can go to C2E2.com for more info, including the guest list and schedule. 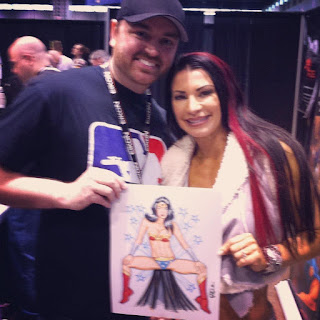 Scott Blair and Lisa Marie Varon in Chicago, IL-February 2012.
Posted by Johngy at 6:00 AM