C2E2 (Chicago Comic and Entertainment Expo) returns tomorrow through March 2. I'll be there as usual, but for now, I am recalling some fun moments from previous years at C2E2.
A few tears ago, I got to spend some time with wrestling announcer "Mean" Gene Okerlund at the Headlocked booth C2E2/. On the first day, I had Scott Steiner with me and Gene poked a bit at Scott for his colorful shirt. Gene kept up that humor all weekend, even though Scott wasn't with me the next two days. It didn't matter. Gene was having fun and I had a big laugh every time.
Chicagoan Nick Hausman joined the fun on and off, too. Nick has been involved in the entertainment and wrestling business for a long time.
Headlocked is a wrestling comic produced by the very talented Michael Kingston. With the original goal of creating a "cool wrestling comic," Michael created Headlocked. He has succeeded. It was embraced by the wrestling community, wrestling fans and comic lovers of all sorts. Through hard work (and lots of comic con appearances), Michael has made Headlocked a big success. 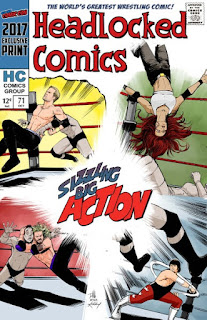 A couple years ago I interviewed Michael about Headlocked. That interview can be found at On the Beat With Michael Kingston.
Michael is still working hard producing and promoting Headlocked.  If Michael is aat a comic con, you can bet there will be several wrestlers joining him.
Unfortunately, Gene passed away last year. He was a legend and is sorely missed.
Go to C2E2.com for more info and follow C2E2 on Facebook for more frequent updates. Also, check out HeadlockedComic.com for some more entertainment. 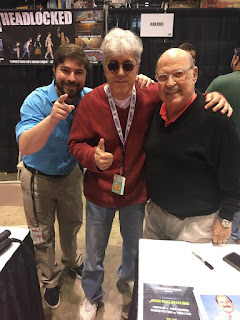