This is a weekly series in which I create virtual trading cards for celebrities wearing sports jerseys. It's time for a little love for my Chicago Blackhawks.

Cornelius Crane "Chevy" Chase worked a few jobs before entering the world of comedy. One of the original cast members on tv's Saturday Night Live, Chase moved onto movies and has been acting steadily ever since. Chase wore a #00 Blackhawks jersey in National Lampoon's Vacation to earn his Celebrity Jersey Card. 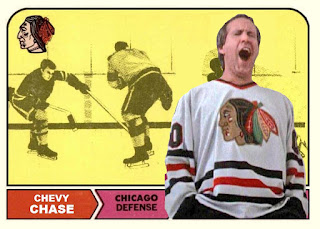 Puerto Rican actor Luis Guzman has carved out a 40+ years career mostly in character roles. Whether on television or in motion pictures, Guzman has probably been in many things you've seen. Guzman shot the puck for the Hawks to earn his Celebrity Jersey Card. Guzman wore #9, a number retired for Blackhawks Hall of Famer Bobby Hull. 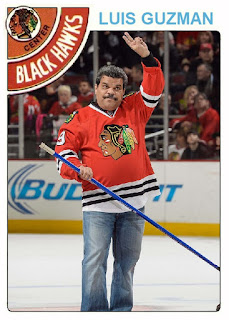