The Motor City Comic Con was supposed to be this weekend, but it has been postponed due to the pandemic. While I sadly wait for the situation to be resolved and the MCCC to be rescheduled, I am recalling some of my favorite times there.
Michigan-based Jay Brant is the talented force behind Heads Up Studios. The name is a clever take on his work, which often is the head of various pop culture icons. He is not limited to just illustrating heads, but it is a large part of his portfolio and a very successful part.

I first met Jay many years ago and I was immediately drawn to his wall of heads. Of course, I had to search for my beloved Aquaman and I found one (applause to Jay for this). Jay has multiple sizes of his creations, including trading card sized creations.
Given my previously mentioned search for Aquaman and my never-ending appreciation of Aquaman, you'd think I would feature that illustration here. Since I have done that in previous posts, I selected BatGirl for this one. I particularly like this one, because it is old school BatGirl, like the version portrayed by Yvonne Craig on tv's BatMan. 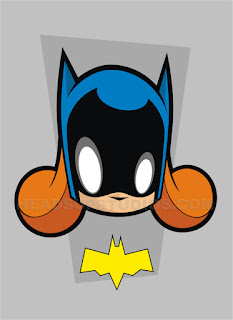 Jay also does commissions. One day, I will get to do his take on the Johngy character and I will add that to my Wall of Johngy, which isn't quite as impressive as Jay's Heads Up Wall.
I always look forward to seeing Jay and his new creations. He is as friendly as he is talented.
Go to MotorCityComicCon.com for all of the info, including the celebrity guest list and scheduling. You can also find Motor City Comic Con on Facebook and other social media platforms. 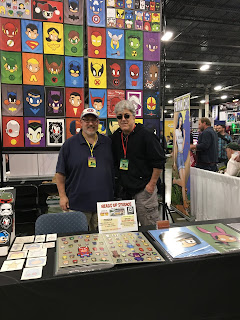