Emma Bartz and the 2020 Northwestern Wildcats

Yesterday, I featured Northwestern Wildcats senior softball player Morgan Newport. Today, I am highlighting her senior teammate Emma Bartz.
After a four year varsity career at Carmel Catholic in Mundelein, Bartz saw much of her playing time at NU as a pinch-runner. In 105 games, she had seven starts and 10 ABs. More importantly, she stole 25 bases and scored 35 runs.
Emma is a great team player. Every player wants to play regularly. Every player wants to bat. Emma practiced just as hard and was just as committed as anyone. It had to be difficult playing her role, but she did it well. It takes a special player to excel in a limited role, but Emma did just that.
Emma should be proud of her accomplishments. I know the coaches, teammates and fans loved Emma's attitude and performance.
If things were normal, I would have been covering the team and reporting about them over the last couple months. With the season halted and no home games played, I wanted to be able to publicly acknowledge and thank the players, especially the seniors like Emma.
I'm hoping to see Emma at future NU games. I am also hoping for Fall Ball in September. Until then, I'll be following the news and updates on the Wildcats at NUSports.com. 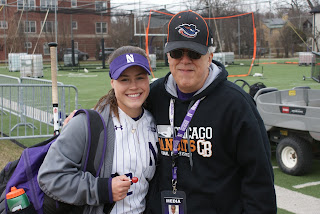