Cards That Never Were is a recurring series in which I create virtual trading cards for players missed in various sets. It is a concept I have borrowed from far too many to list, but I appreciate all of their efforts. More of my cards and a lot of creations (and not just baseball cards) of others can be found in the Custom Baseball Cards Facebook group.
Gaylord Perry followed his brother Jim into pro baseball when he signed with the San Francisco Giants in 1958. He made his MLB debut in 1962 and remained in the majors through the 1983 season. During his career, he pitched for 8 teams, won the Cy Young award in both leagues, pitched a no-hitter and won 314 games, all of which led to his induction into the Hall of Fame.
Of course, Perry was known for allegedly throwing a spitball. A lesser known fact is that Gaylord the Camel, the mascot of the Campbell University Fighting Camels was named in honor of Perry, who studied there.
For all of his efforts, Topps gave Perry cards in every set 1962 though 1983. Somehow, he earned a card in '62, without having pitched in the majors, a rarity back then. He did not get a "career capper" in 1984 and I corrected that omission. 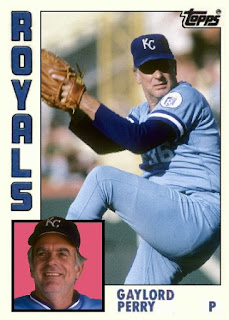