Cards That Never Were is a recurring series in which I create virtual trading cards for players missed in various sets. It is a concept I have borrowed from far too many to list, but I appreciate all of their efforts. More of my creations and many great creations of others can be found in the Custom Baseball Cards Facebook group (and not just baseball cards).
Bert Jones was a star QB at LSU before being selected by the Baltimore Colts in the 1st round of the 1973 NFL draft. Jones played nine seasons with the Colts, before playing four games with the Los Angeles Rams in his last season. All told, he started 96 games (playing 102) and threw for 18,190 yards with a 56.1% completion percentage. He had 124 TDs and 101 INTs.
For his efforts, Jones received cards from Topps in 1973-'77 and '79-'82. That left 1978 and 1983 as missing cards. I created the '78 card and Lynn (from the previously mentioned FB group) created the '83 card, which is beyond my abilities. 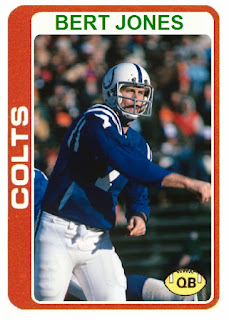 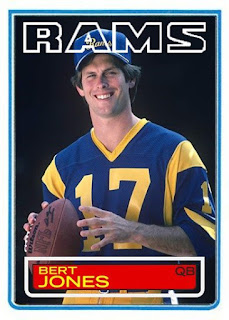