Celebrity Jersey Cards is a weekly series in which I create virtual trading cards for celebrities wearing sports jerseys. Today, I feature two folks I know from my work on Global Women's Sports Radio.

Kelsey Nicole Nelson graduated from the University of Maryland and has worked in the media for several outlets, including her current position with the Washington Football Team. Kelsey is a supporter of GlobalWomensSportsRadio.com and we encourage everyone to check out KelseyNicoleNelson.com. After joining the Washington media team, Kelsey donned a #11 jersey, most notably worn by Mark Rypien. I surprised Kelsey by posting her "Celebrity Jersey Card" on her Facebook page. 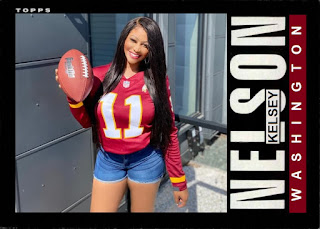 Several months ago, Henry Gee approached me about writing for his site, GlobalWomensSportsRadio.com. It was a no-brainer/ I love women's sports and am happy to give these women more exposure. When Henry saw my Kelsey card, he asked me to make one for him. When the boss makes a request, I try to comply. Henry sports a Milwaukee Brewers jersey for his Celebrity Jersey Card. 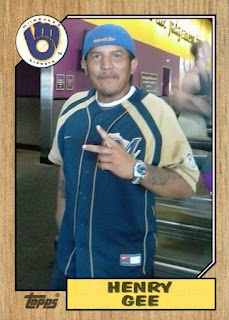