It's been too long since I featured Larry Freda here. The man has met hundreds of celebrities and could easily have Larry's Beat.
Based on the East coast, Larry meets a lot of New York athletes, but I won't hold that against him. He has also met many wrestlers and other celebrities.
Several years ago, Larry met Bubba and D-Von Dudley of the Dudley Boyz tag team. Back then, they were in Impact wrestling, probably as Bully Ray and Devon. No matter their names, they are the most decorated tag team in wrestling history. Together for more than 20 years, the Dudley Boyz have won 20+ tag titles in the major companies. They are the only tag team to hold WWE's original Tag Team Championship, the Raw, ECW, WCW, NWA, TNA and IWGP Tag Team Championships.
Bubba and D-Von started in ECW as part of the Dudley family,  a team of comedic fan favorites that consisted of many illegitimate children of "Big Daddy" Dudley. Bubba and D-Von were billed as half-brothers.
A question needs to be explored. Would Larry have fit in with the Dudley family? Although I don't know what gimmick he would use, Larry definitely could have been a Dudley and I mean that in all the best ways.
A big man with a passion for wrestling, Larry could incorporate his east coast roots. He's certainly a character already and if given the stage, I think he would have developed that into something even bigger.
I need to feature Larry more here. He has so many great celebrity pictures. I am hoping to actually get a picture with Larry someday! 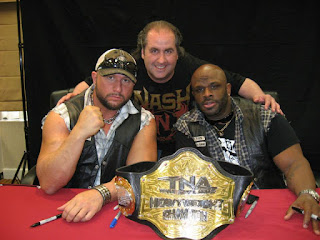