This is a regular series in which I create virtual trading cards for celebrities wearing jerseys. Midway through the football season, today we feature some models from Deal or No Deal from a special NFL episode.
Born in Elizabeth, NJ, Marisa Petroro started entering beauty pageants when she was four and won the Miss Italia title while in her teens. Petroro is a cancer survivor, having been diagnosed when she was 19. In addition to being a model on DOND, Petroro has quite a few acting credits on her resume. On DOND, Petroro held briefcase #18, which she then wore on a Tennessee Titans jersey for the special show. The most notable player to wear #18 for the Titans was wide receiver Kenny Britt, although punter Cliff Parsley wore it when the team was still the Oilers. 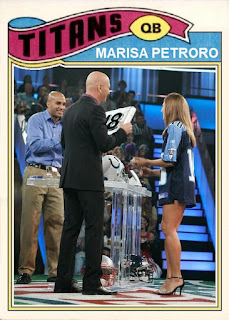 Chicago native Katie Cleary modeled in high school, earned a track scholarship in college and was in real estate in Chicago, before her show business career really developed. Sadly, Cleary endured the horror of her husband committing suicide. Cleary held briefcase #11 on DOND and on her Miami Dolphins jersey on the special show. Currently, wide receiver DeVante Parker wears #11, but utility player Jim Jensen was a solid #11 in the 1980s. 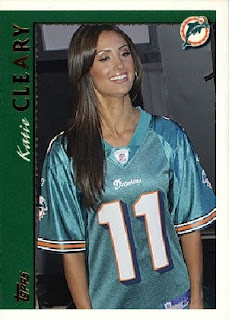