Cards That Never Were is a recurring series in which I create virtual trading cards for players missed in various sets. It is a concept I have borrowed from far too many to list, but I appreciate all of their efforts. Other creations of mine and many others can be found in the Custom Baseball Cards Facebook group (which is not just baseball cards, despite the name).
After playing college ball at North Carolina State, quarterback Roman Gabriel was selected by the Oakland Raiders in the 1st round of the 1962 AFL draft and by the Los Angeles Rams in the 1st round of the 1962 NFL draft. Gabriel chose the Rams. He played 11 seasons with the Rams and his last five seasons with the Philadelphia Eagles. In his career, he threw for 29,444 yards with 201 TDs and 149 interceptions.
For his efforts, Gabriel received cards from Topps and/or Philadelphia from 1962-'65, '67-'72, '75-'76 and '78. That left '66, '73, '74 and '77 as missing cards.
There are some funny notes about his cards though. In 1966, Philadephia did not give him a regular card, but had a special dual card of Gabriel and back Dick Bass. In 1973, Topps did not give him a regular card, but he was on a special "Boyhood Photo" card. In 1978, Topps airbrushed Gabriel into a Rams uniform to give him a card, because the thought was he was going to resign with the Rams for one last season. I don't feel the need to "fix" his 1978 card, but I did fill in the gaps by creating four other cards for Gabriel. 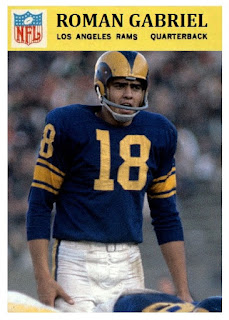 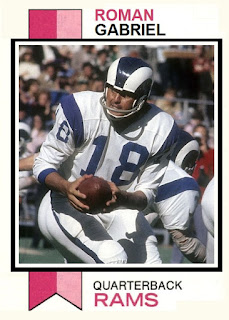 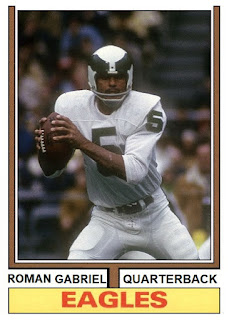 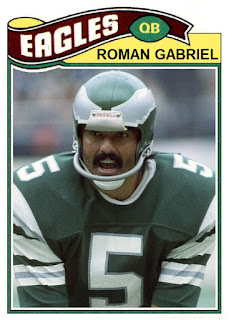 TCard companies made some questionable calls over the years. It always annoyed me when a player was pictured on a Team Leaders card, but didn;t get a regular card (like Ron Rydalch in Topps 1978).