Cards That Never Were is a recurring series in which I create virtual trading cards for players missed in various sets. It is a concept I have borrowed from far too many to list, but I appreciate all of their efforts. More of my creations and many great creations of others can be found in the Custom Baseball Cards Facebook group (and not just baseball cards).
Jim Zorn was a QB at Cal-Poly Pomona before signing as a free agent with the Seattle Seahawks prior to their first game. He played nine seasons with the Seahawks and one with the Green Bay Packers. He also played one game with the Tampa Bay Buccaneers in 1987, but I believe that was because of the strike. All told, he played 140 games, starting 106. He threw for 21,115 yards on a 53% completion percentage, with 111 TDs and 141 INTs.
For his efforts, Topps gave Zorn a card from 1977 through 1983. That left 1984-'86 and possibly '88. I could not find any pictures of Zorn with the Bucs, but I was able to create cards for 1984-'86. 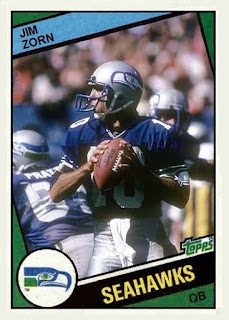 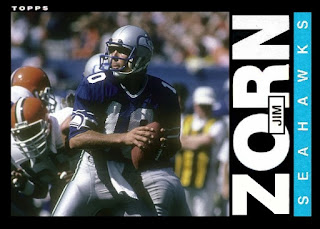 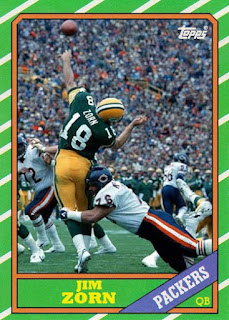 Loved Zorn back in the day. That Packers card is too cool. Great job on the photo selection.

Thanks. I am still on the lookout for Zorn with Tampa from 1987.