Celebrity Jersey Cards is a weekly series where I create virtual trading cards of celebrities wearing sports jerseys. With no football this weekend, I take a hockey break.

Rick Sutcliffe will forever be loved by Chicago Cubs fan because of his Cy Young award winning 1984 season, where he led the Cubs to the playoffs. A former Rookie of the Year, "The Red Baron" started with the Los Angeles Dodgers and played for the Cleveland Indians before joining the Cubs in an early season trade that helped spark their season. Sutcliffe pitched for the Cubs through the 1991 season, before finishing his career with the Baltimore Orioles for two seasons and the St. Louis Cardinals for his final year. Sutcliffe earned his Celebrity Jersey Card in the Shoot the Puck game day event for the Chicago Blackhawks 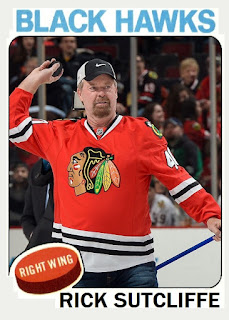 Musician Tom Morello is probably best known for his time with Rage Against the Machine and later Audioslave. He was born in New York, but raised in a western suburb of Chicago. Morello was ranked No. 40 in Rolling Stone magazine's list of the "100 Greatest Guitarists o All Time." Morello earned his Celebrity Jersey Card while in the stands with the fans. 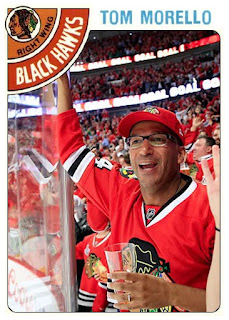