On the Beat With Evan Toth

While in New York several years ago, I did a self-guided mini-tour of a few Billy Joel-related locations. Last week on Facebook, I saw a picture of someone sitting on the iconic steps from Joel's Innocent Man album, just like I did. 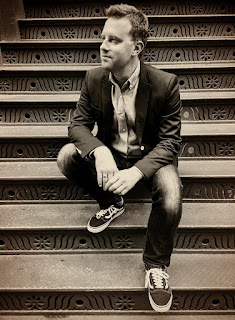 The picture was similar, but that's where the comparison ends. I am simply a Joel fan, while the man in the picture is Evan Toth, a talented musician working on an album with several members from Joel's classic band. I immediately reached out to him.

Toth has been writing and performing for more than 20 years. When not performing, When not performing, Toth works in special education and hosts The Evan Toth Show on WFDU, 89.1 FM in the New York City area. He also hosts a podcast called Radar through The Vinyl District website which features interviews with musical personalities such as Joan Baez and Richie Havens. He also released two albums, Welcome Back to Hell (2007) and Everything is Fine (2016).
Currently, Toth is working on The Show, an album with Joel's classic lineup featuring Liberty Devitto, Richie Cannata and Russell Javors, with Malcolm Gold on bass, all of whom perform with The Lords of 52nd Street. It has all original music written by Toth. Of course, The Show was mostly recorded at Cannata's Cove City Sound Studios.
Toth gave me a preview of the album and I was hooked right from the first song, also titled "The Show." Joel's influence is evident, from Devitto's signature drumming to Cannata's amazing sax and the steady rhythm provided by Javors. Also, Gold using the late Doug Stegmeyer's bass was a cool touch. Toth's wife Laura joins him for one song and supplies backup on others.
I mentioned to Toth how my favorite song on the album happens to be "The Show." I didn't want him to think I only listened to that first song. In fact, I liked all 10 of the songs on the album. In the last few days, I have listened to the album several times. The various songs are taking turns getting stuck in my head.
Our conversation veered from Joel for a bit when talking travel. For wish list destinations, Toth started with Japan, where he previously spent time performing in Tony 'n' Tina's Wedding. He also mentioned the Bari region of Italy, where his wife has family. Last, he added Hungary and that eastern European area for his roots. When I asked his dream venue, he mentioned Red Rocks, Royal Albert Hall, Lincoln Center and Madison Square Garden before picking the classic Carnegie Hall.
It's no secret I am a huge fan of Joel, but I am also a fan of other great music. Toth's The Show is the intersection of both. You won't have to be a fan of Joel to enjoy this album.
For more information, go to EvanToth.com. Also, follow Toth on social media for more frequent updates and other fun.
Posted by Johngy at 6:00 AM