Larson finished with 4,569 points. Only 108 points separated second place from fourth and Karsta Lowe in fifth place was only 16 points behind fourth.

Samantha Seliger-Swenson, Deja McClendon, Bethania DeLaCruz, Sheilla Castro, Morgan, Aury Cruz, Brie King, Lauren Gibbemeyer and Alex Holston were in the photo session that can be found at On the Beat with Athletes Unlimited Volleyball Week 5.

Go to AUProSports.com for more info on the league and players. Also, check here, GlobalTravelerUSA.com, Patch.com and GlobalWomensSportsRadio.com for my recurring coverage. 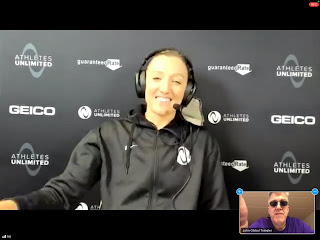