The Northwestern Wildcats swept the four game weekend series against the University of Wisconsin. In the middle of the series, Kate and Caryl Drohan made history. The Drohan sisters became Northwestern softball's all-time wins leaders with their 641st victory.

Since taking over the Northwestern softball program in 2002, Head Coach Kate and Associate Head Coach Caryl have guided the Wildcats to an impressive 642-371-1 record. Along the way, Northwestern has become a legitimate softball powerhouse.

While playing for the Providence softball team, Kate was named to the All-Big East team in 1992, 1994 and 1995. After a few assistant coaching stints elsewhere, Kate joined Northwestern's coaching staff under the legendary Sharon J. Drysdale. After four seasons, she was named Head Coach.

Under the Drohan regime, the Wildcats have won a pair of Big Ten Championships and made back-to-back Women's College World Series semifinal appearances. Over the years, nine different Wildcats have earned a total of 16 All-America honors. Also, NU has won five Big Ten Player of the Year, three Big Ten Pitcher of the Year and six Big Ten Freshman of the Year awards. Ten Wildcats have been selected in the National Professional Fastpitch (NPF) senior draft or gone on to play in the league, including Tammy Williams and Emily Allard, who went on to star for the Chicago Bandits.

The Wildcats are now 15-1, good for first place in the Big Ten. Illinois is second at 10-2 (10-5 overall). Northwestern  returns to action April 2-4 in a four game series at the University of Maryland. The regular season ends with a four game series hosting Nebraska and then it is off to the playoffs. 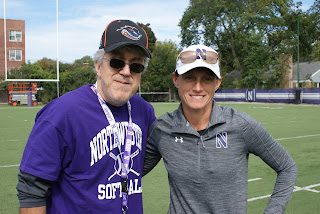 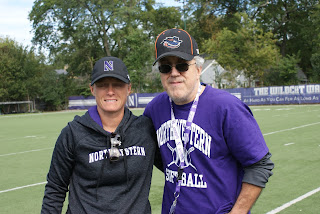