Cards That Never Were is a recurring series in which I create virtual trading cards for players missed in various sets. It is a concept I have borrowed from far too many to list, but I appreciate all of their efforts. More of my creations and many great creations of others can be found in the Custom Baseball Cards Facebook group (and not just baseball cards).
The younger brother of Dick and Hank Allen, Ron Allen started his pro career in the Philadelphia Phillies organization in 1964. After hitting 135 homers in the minors, Ron finally made it to the majors with the St. Louis Cardinals for seven games in 1972. In seven games with the Cards, Ron had 11 plate appearances, getting one hit (a home run, one RBI and two runs scored. Defensively, he appeared in five games at 1st base.
Topps did not give Ron a card for his brief stint with the Cardinals. While that is understandable, as long as I could find a picture and somewhat colorize it, I had to try to make that missing card. I made two. Neither is great, but they are the best I could do.
Additionally, I am showing a 1969 card that Lynn, from the aforementioned FB group, created. It's a beauty of a card, too. 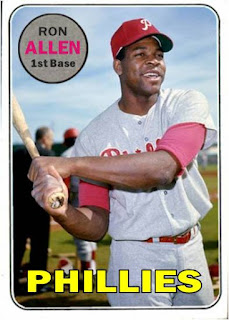 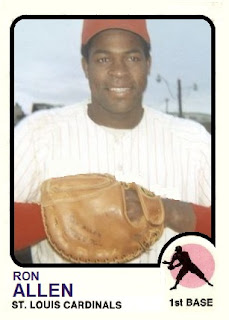 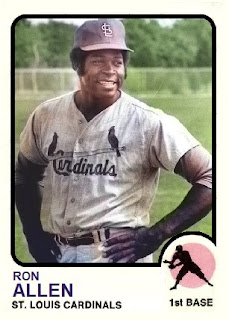