Celebrity Jersey Cards is a weekly series in which I create virtual trading cards for celebrities wearing sports jerseys. Today, I continue working my way alphabetically through all MLB teams.
Oakland native Billie Joe Armstrong is the co-founder, lead vocalist, primary songwriter, and lead guitarist of Green Day, He met fellow co-founder Mike Dirnt while both were in elementary school. The duo started Sweet Children ion their teens and that morphed into Green Day. Armstrong stayed true to his roots by wearing an A's jersey when he was on the field in Oakland, earning his Celebrity Jersey Card.. 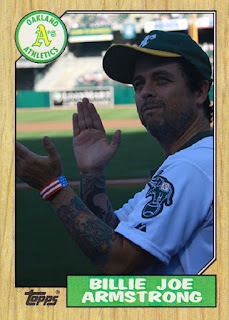 Fellow Oaklander Mike Dirnt is co-founder, bassist, backing, occasional lead vocalist and former guitarist of Green Day. Dirnt and Armstrong also co-founded Oakland Coffee Works, a company selling organic coffee beans and the first company to use mass-produced compostable bags and pods. Green Day was inducted into the Rock and Roll Hall of Fame in 2015, their first year of eligibility. Dirnt also showed his loyalty to the A's by donning the green and gold while on the field in Oakland, earning his Celebrity Jersey Card. 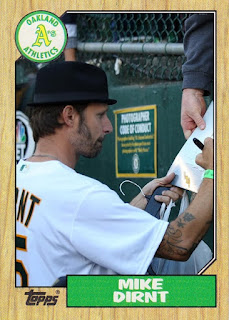